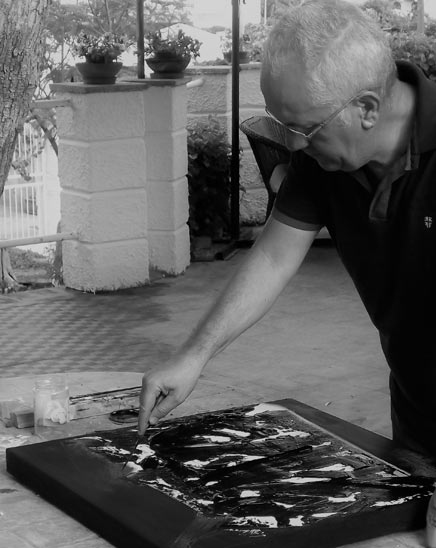 lives and works in Racalmuto (AG) Sicily – paintings music, video art, settings (habitat) are the artistic expressions that he prefers. From the “new figurative ” of period 2000-2010, aimed on investigating the commodification and homoligation of beauty, of flattened femininity by the cold mass-media parameters, his recent works are aimed at a dynamic and experimental abstractionism in which the traits, tensions trajectories are open to new scripts and pictorial languages of modern conception.

From the critical text by Vittorio Sgarbi: “ARTE ESSENZIALISTA” a mature conception of geometric abstractionism, ” He seemed to be following permanently the road of figuration, the paintings of the Sicilian Piero Baiamonte, cantor of youthful femininity, adapted to the rules of the so called Fashion Age. Then something suggested into his way of seeing, a need of trying solutions that could put in discussion: the landing points achieved until then, as if to want to look for something more specifically artistic behind the exposure of beautiful trendy appearances, although not without their charm.

The result is in the production named by Mr. Baiamonte himself “essentialist”, who knows if with similar valences with those with which the term is conceived in philosophy: the breakthrough is clear, there is no more figuration and with that the graceful young ladies. Instead of them a mature conception a geometric abstractionism, made of structurally articulated systems, obtained from the combination of simple elements, in particular of straight filaments that intertwine and tangle into cobwebs.